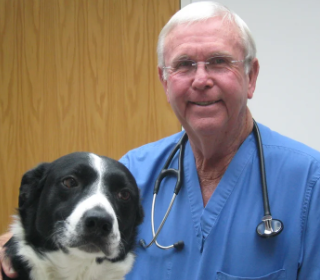 Posted at 15:50h in CVMA news by Katherine Wessels
0 Likes

CVMA member and former president of CVMA Bill Fredregill, DVM passed away on October 21, 2022. CVMA leaders and the Colorado veterinary community mourn his passing and extend condolences to his family.

Dr. Fredregill began his lovable defiance when he was born to Straud Fredregill and Alice Fredregill (Van Gundy) on August 28, 1947. He was the son of a consummate businessman and a mother to both family and community, who was a nationally recognized volunteer and American Red Cross Governor. Dr. Fredregill would later leverage the lessons he learned from his parents to establish two community institutions: the Veterinary Medical Clinic and the Logan County Humane Society.

As a child of the 1950s and early 1960s, Dr. Fredregill grew up in a time of heroes and idolized his elder brothers Jim and Bob as such. He frequently professed his love of small-town life and would often recall a happy childhood spent chasing his beagle around the neighborhood. Later in life, he did his part to make his neighborhood a happy place by filling his yard with giant blow-up decorations at Halloween and Christmas. Dr. Fredregill also shared many fond childhood memories of the view from the backseat of family road trips and the wonderment inspired by a trip to Mexico. As a young man, he played the bass clarinet and relished the communion of marching band and concert band, the latter of which took him to Chicago for a national competition.

Bill early developed a passion for animals, taking his first job as a kennel boy for Dr. Pete Rounds. This passion soon focused into a dream of a career in veterinary medicine, which he pursued relentlessly for over 50 years: first at Colorado State University, then to Pueblo, and finally taking the initiative to open and build his own practice in his hometown of Sterling. Dr. Fredregill’s dream was not just to become a veterinarian, but rather to continually practice veterinary medicine at the highest level. He lived this dream by constantly seeking to implement the cutting edge of veterinary technology. Dr. Fredregill daily delivered a level of care that made him a hero to many in his own community, and he practiced at the highest level until his final days, “saving lives in routine manner” as he would say. He achieved the zenith of his veterinary skill and fulfillment over the past 10 years of practice while serving as a mentor to and working collaboratively with Dr. Lyanne Santistevan and Dr. Jolynn Sakugawa. He had never been happier in practice.

Dr. Fredregill gave any hours not given to his practice to being a single father to his two sons, Bryson and Austin. Despite maintaining a 24/7 on call emergency practice, he never missed a little league game, recital, concert, or homework session. He passed on to his boys a passion for education, a love of travel, and most important, his sense of humor. Trips with him were both magical and maniacal. During the early years, he would kick-off each spring break by packing his boys into an Econoline Van loaded with luggage, coffee, and a cooler full of peanut butter bologna burritos. What lay ahead was a 16-hour, overnight mad dash to Scottsdale, AZ, where a week of sunburnt fun awaited all. Dr. Fredregill similarly took on the solo burden road trips to Mesa Verde, the Grand Canyon, Mt. Rushmore, and Rocky Mountain National Park. Dr. Fredregill and his boys also gave hours and a few tears to long Disneyland lines, where he persuasively “suggested” his youngest son not to “choose” to exit the line and avoid the ride. He was persuasive, fears were faced, and no rides were missed. No SCUBA dives were missed either as he took his boys, their wives, partner of twenty-six years, Shari Miller, and other family friends around the globe to explore underwater reefs for well over 1000 dives. Dr. Fredregill both cherished and fought for his role as a father, which he extended to his daughters-in-law, Tara Fredregill and Anika Fredregill. He frequently told his boys that he chose to be a father because it was what he wanted most, and his boys never once doubted his love. He felt the same about his role as a grandfather to his namesake William Clay Fredregill, or “Little Bill” as he called him. He was much loved by his sisters-in-law, nieces, and nephews Jeannette, Tryna, Ben, Lynn, Domininque, Blake, Lynette, Jonathan, and Davis with whom he cultivated a trust and friendship that served him well in exchanging practical jokes with the same. Dr. Fredregill also shared his endless compassion with many who struggled with addiction. Having contemplated deeply and at great lengths the concepts of blind faith and acceptance, Dr. Fredregill had no shortage of time to help others find salvation as he had. He understood how to navigate tough times with humor, often posing the question to those who sought his counsel, “You know what my grandmother would say?” The answer was always an expletive laden piece of wisdom. Dr. Fredregill served as a rock for many, accumulating serenity, courage, and wisdom without ever ceasing to ask for more serenity, courage, and wisdom. Dr. Fredregill may be remembered most for his humor and his self-recognized humility, the latter verifiable by his frequent assertion that, “I am the humblest guy I know.” His booming belly laugh was infectious and spread primarily through his irreverence. His friends and family will have no trouble calling to mind the many times he made them laugh. He would want them to do just that and to always remember to look on the bright side of life.

The family will receive friends from 4 – 6 p.m., Friday, October 28 at Chaney-Reager Funeral Home. Please join Dr. Fredregill’s family at First Presbyterian on Saturday, October 29, at 10:00 a.m. for a celebration of his life.

In lieu of flowers please make donations to the Logan County Humane Society at loganhumane.org/donate.